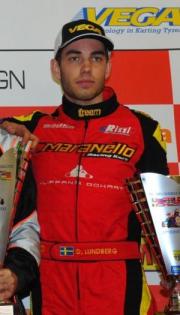 Last weekend at the Klippan track , after a long winter break the race season started in Sweden. The conditions was very cold as usual with snowfall at race day.

Three new drivers was present to the first race with the Swedish Team Maranello coordinated from Magnuss Johansson.
kicked off the seson very well under slippery conditions, in both the kz class with Douglas Lundberg and Joel Eriksson that also raced for his first time in kz, and Alfred Nilsson also first time racing in the j60 class. After a very tight race in the kz class did Douglas pass the finishing line as number 1.
We are wery happy to kick start this season with a win in kz class using a maranello RS10 chassis and tm kz10B engine