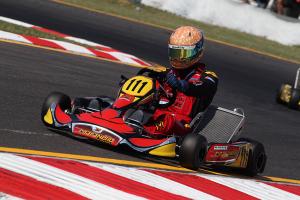 Marco Zanchetta, quick in qualifying and heats, but forced to the retirement in the Finals due to incidents, among the protagonists too. Very good performance for Mattia Drudi, eighth in Final two. Bad luck for the other Maranello Kart drivers Enrico Bernardotto, Nicola Gnudi and Lorenzo Lapina.

Castelnuovo Berardenga (Siena). Solid presence for Maranello Kart in the Italian CSAI Karting Championship at the Circuit of Siena with excellent performances by all its drivers racing in KZ2 where Massimo Dante leads the standings.

On the side of Massimo Dante, Marco Zanchetta, Mattia Drudi, Lorenzo Lapina, Nicola Gnudi and Enrico Bernardotto, all on Maranello-Tm, have been defending Maranello Kart’s colors in Siena with very good lap-times and all got qualifying for the final stages on the Tuscany circuit.

The most productive has been Massimo Dante, who confirmed his classification lead thanks to a ninth place in race one and a sixth in race two, two placings that allowed the driver from Trento to keep the lead of the standings where he now sits 15 points clear of Pastacaldi and 42 of Celenta.

WSK Euro Series vice-champion – who has also been in the fight for the KZ2 European Title until the end –  Marco Zanchetta has been quick as usual. He took part in the Italian Championship to  train ahead of the World Championship that will take place in Varennes next 22nd of September but nonetheless he showed his qualities in Siena starting from qualifying where he was seventh absolute while in the heats he was third and fourth. In the Finals Zanchetta could not manage to capitalize what done in the heats as a series of contacts forced him to an early retirement in both races. That was a real shame as by judging from the lap times posted he would have certainly hit a good result.

Solid performance also from the young Mattia Drudi, who recovered in the finals the delay accumulated in the heats due to an incident. In Final one Drudi recovered from the back all the way up to P13, while in race two he improved his position further gaining a very good final eighth place. In the championship standings Drudi is currently holding the eleventh position.

Good result in the first final also for Nicola Gnudi, 16th,  and Enrico Bernardotto 17th, while Lorenzo Lapina had to retire while about to get the tenth position. In Final two Bernardotto was involved in a multiple incident at the start (luckily without serious physical consequences) but he could not continue the race due to the heavy damage to his kart. Retirement also forGnudi at the restart after the first incident, while Lapina ended in twentieth position.