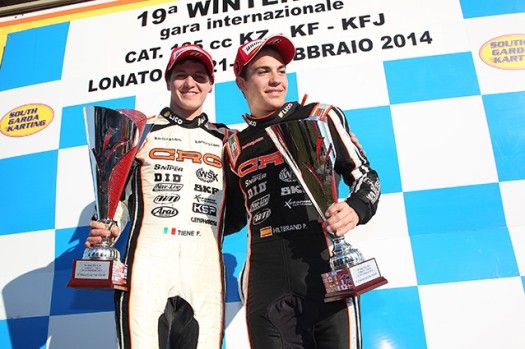 Tiene and Hiltbrand produced a spectacular KF2 Final and obtained the second and third step of the podium. CRG on the KZ2 podium with Andrea Dalè. Lennox was bumped in the Final but clinched anyway a good 8th place. Forè ended 10th.

Lonato del Garda (Brescia, Italy). CRG works team lived a very good season opener at the 19th Winter Cup of Lonato, race that highlighted the technical competitiveness of chassis and engines as well as of all drivers of the team. The Winter Cup is back as the “trail-maker” of this new season with a race that had been quite awaited to get some confirmations after the international success harvested last year. Satisfaction has not been long in coming in Lonato where CRG chassis pushed by Maxter in KZ and by TM in KF, turned out to be quite competitive and among the main protagonists of the whole event.

SPECTACULAR DOUBLE PODIUM IN KF2. The greatest satisfactions – as regarding the final result – came from KF2 where Felice Tiene and the young Spaniard Pedro Hiltbrand dominated the category with their TM engines by GFR managing to finish on the podium in second and third place. Excellent was the performance of Felice Tiene, who set the quickest time of his session in qualifying, came out of heats on top, was fifth in the Prefinal and in the Final produced a superb race challenging Alessio Lorandi for the victory as the latter had managed to gain some ground in the initial stages of the race. Absolutely spectacular was also the race of the new-entry Pedro Hiltbrand, who managed to climb all the way from the 22nd spot of the starting grid to an incredible final third place! Dionisios Marcu has been quite unlucky instead. He has been author of a good debut in KF2 but was forced to the retirement in the Final due to a contact at lap one. Nevertheless, he has had solid weekend as proved by the 10th absolute time in qualifying.

VERY GOOD PERFORMANCE FOR LENNOX IN KZ2. Jordon Lennox-Lamb run a very good KZ2 race on his CRG-Maxter. He has been forced to keep gaining positions after he was stripped of the second time in qualifying as he was 100 grams underweight. Despite of this, the British driver made it through to the final stages recovering up to midfield in the Prefinal. A bumping made him lose precious time in the Final, but then he put the hammer down and ended eighth thanks to his very good laptimes.  Davide Forè obtained the 10th place with team DTK after being on top of his qualifying session. The Spaniard Alex Palou, at his first contact with KZ2, ended 17th in the Prefinal and 16th in the Final. Things did not go very well to Fabian Federer. He had been very quick in qualifying but in the heats he lost his reacting to an incident and was therefore disqualified.
CRG name was carried high by the former works driver Andrea Dalè, on CRG, who dominated the scene throughout since qualifying, winning also the Prefinal before finishing third in the Final.

Postitive KF3 debut for last years winner of 60 Mini’s WSK Euro Series and Master Series, the Spaniard Eliseo Martinez. He run a good series of races but some contacts penalized his final result, especially in the Prefinal. Martinez managed anyway to put in a recovery race in the Final and ended 14th. The young Briton Archie Tillett did not make it to the final as he was forced to run the repechage race where he ended 14th and therefore out of the top six that granted access to the final stages.

Felice Tiene: “I had some little engine problems in Prefinal and at the beginning of the Final. I started gaining positions back as soon as I managed to fix these problems, but unfortunately it was too late to hunt for the victory. In the final laps I was very quick but I decided not to run too many risks securing the second place.”

Pedro Hiltbrand: “I am really happy on how things went in my first race with CRG. It has been a good final as I started from the back but I was very quick and did not have difficulties in climbing all the way up to the third place. I would like to thank the whole team on the great job they have done. I am quite hopeful for the coming races.”