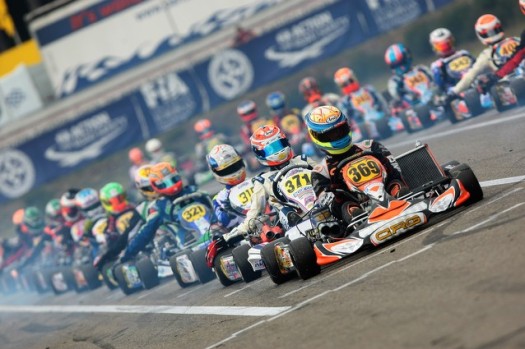 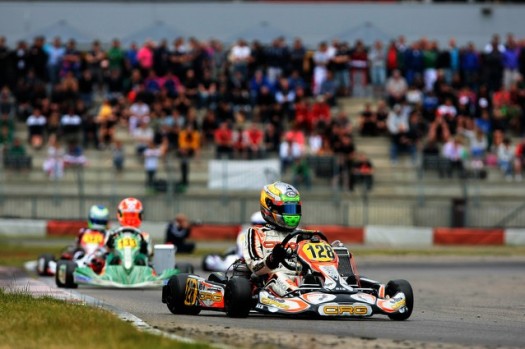 Andrea Dalè, privateer driver on CRG-Maxter, dominated the Belgian weekend in Genk winning also the Final, after claiming pole position and victory in all four heats. Federer was also on the podium of KZ2. Felice Tiene stopped by an incident in KF. Jordon Lennox-Lamb on the KZ podium in third place, ahead of Jorrit Pex.The weekend in Belgium at the Circuit of Genk ended with a triple podium marked CRG-Maxter, thanks to a dominant Andrea Dalè, the third place of Fabian Federer in KZ2, and the third of Jordon Lennox-Lamb in KZ, who proceeded Jorrit Pex. Very tough luck for Felice Tiene in KF, who was involved in an incident when he was about to attack the front-runners in a Final whereby he would have certainly been among the protagonists.

Andrea Dalè, privateer loyal to CRG colors since his involvement as works driver for the Italian firm, had the upper hand on all his rivals. The driver from Brescia, on CRG-Maxter, got full haul in Genk as he started from the pole position, kept his momentum with 4 wins out of four heats, won the Prefinal and then claimed a fair and square victory in the Final, setting also the fastest lap of the race. Nothing is left to say… “well done!” Really uncatchable by everybody, Dalè has been the “king” of the Belgian weekend winning the first of the three rounds of the European CIK-FIA KZ2 Championship.
Remarkably enough, Andrea Dalè has been the quickest of all the weekend, even compared to the racers of the higher category KZ, both in qualifying when he posted the laptime of 52”801 – that was the absolute record of the event – and in the Final where he posted a 53”017.
Fabian Federer has been very good in KZ2 on CRG powered by Maxter supported directly by the factory, as he ended third in the Final, after a stunning comeback started from P10 due to the fifth place in Prefinal-2.
Some tough luck hit the Costa Rica’s driver Daniel Formal, who was involved in an incident at the start of the Prefinal and then did not make it to the Final. Very good performance for CRG Holland’s Finn Kooijman, on CRG-TM, who was fourth in the KZ2 Final after also holding the second position. The German Maik Siebecke, on CRG-Modena, put in a good Final ended in tenth place. Good growth also for Stan Pex, who is the younger brother of Jorrit Pex, good 19th on CRG-TM.

TIENE STOPPED BY AN INCIDENT IN KF

Felice Tiene could not lunge in KF after starting from the eighth spot of the grid in the Final following a good comeback in Prefinal, where he was 19th on the grid due to an incident in one heat. The Italian driver – who has been racing with KVS engine for his title hunt – was quite ready in the Final to gain P7 at the start closing in on the front runners. Unfortunately, an incident blocked him at the start of the second lap. He then finished in 25th place. This was a real shame as Tiene could have certainly been capable of fighting for the victory to aim to the title in the final race scheduled for the end of August in England.
The Spanish CRG driver Pedro Hiltbrand, had a solid weekend in KF. He managed to gain access to the Final in the repechage race recovering from P20 to third! He later on ended 11th in the Final race. Dionisios Marcu also had a good comeback, as he finished 15th in the Final after getting off from P26.

LENNOX ON THE PODIUM IN KZ

Jordon Lennox-Lamb put in a good performance in KZ. The British driver, on CRG powered by Maxter with the factory support, managed to claim the third step of the podium recovering from the initial eighth position in a very good weekend for CRG.
Lennox proceeded Jorrit Pex on CRG-TM, as the latter ended fourth. The two drivers have been among the main racers of the highest category with the shift throughout the weekend. Davide Forè on CRG-TM run by team DTK ended 16th instead (+10”), while Yannick De Brabander also on CRG-TM could not materialize the starting seventh place and conceded some positions until the final lap when he was forced to the retirement. The Final was won by Ardigò, who has always been among the front runners and closed ahead of Rick Dreezen ZANARDI-PARILLA, while the third place – as said – went to Jordon Lennox-Lamb.