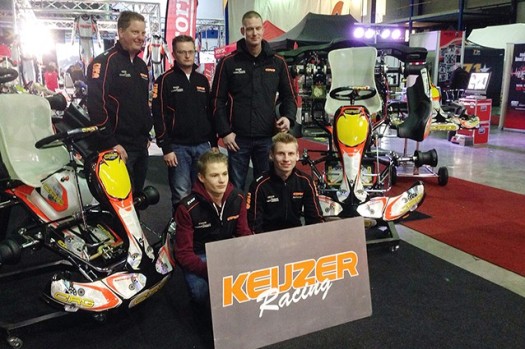 The Dutch team Keijzer Racing, winner of the last two editions of the German Championship, switched to CRG chassis for an high level 2015 season. In the 2015 lineup, Martijn van Leeuwen in KF and Bard Verkroost in KF Junior.

CRG is pleased to welcome the arrival of the Dutch team Keijzer Racing that decided to use the karts produced by the Italian company in 2015. This is great news for CRG colors that will therefore count on the support and competitiveness of the excellent team led by Willemjan Keijzer in international races.

Team Keijzer Racing particularly shone in the most important International Championships in the last few seasons. Last year it secured the German DKM Championship with Martijn van Leeuwen, repeating the victory scored in 2013 by the same strong Dutch driver in KF Junior. The team also hauled a prestigious fifth place in 2014’s KF World Championship held in Essay (France) – again with van Leeuwen, who also competed in the European KF Championship ended in P9, after an unlucky final held in Brandon (England). Team Keijzer also got on the podium of the WSK Final Cup of Adria at the end of the season, thanks to the third place taken by Martijn van Leeuwen.

« I am really happy on the season that just ended – stated Willemjan Keijzer – as not very many teams managed to win the German Championship in two different categories like Junior and Senior. Despite some up and downs, we got a great job done. We intend to run an even stronger 2015 on CRG material.”

Team CRG Keijzer Racing will line up again Martijn van Leeuwen in KF and Bard Verkroost in KF Junior during 2015 on CRG chassis, but the team is currently evaluating the requests received by some other drivers to be part of the team. The sporting programme of the team will include the German Championship, WSK and CIK-FIA Championships and other International races.