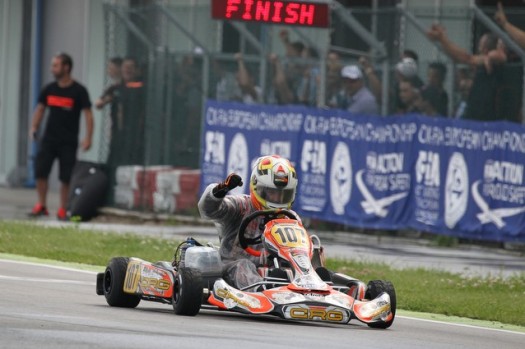 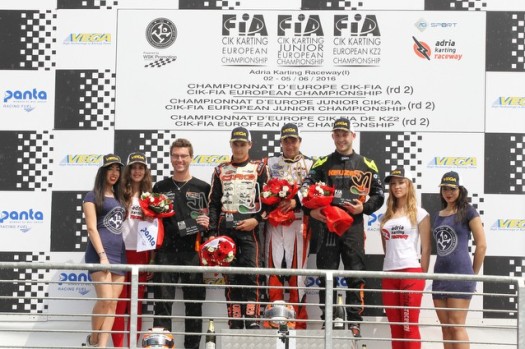 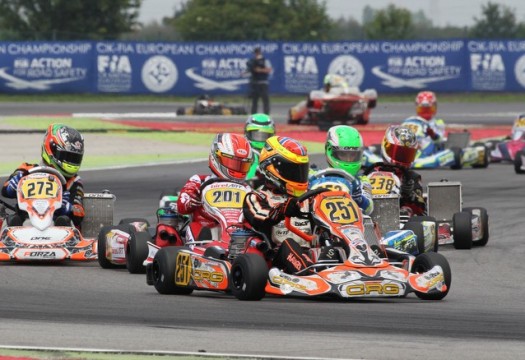 CRG has been victorious in the CIK-FIA European Championship in Adria, winning 5 races out of the 6 run in the final stages among Prefinals and Finals of KZ2, OK and OK Junior. CRG’s one-two-three in KZ2 has been stunning, with three different engines in the top 3. Title games are now open in all categories.

Unstable weather has made things even more challenging at the Adria Karting Raceway in occasion of the second round of the European KZ2, OK and OK Junior Championships. This round has been characterized by tricky and unpredictable weather mixing sun and rain causing also some questionable decisions, like that of making OK Junior’s Final starting on slick tyres despite the falling rain!
CRG colors scored a crushing victory with the one-two-three completed by Federer, Pex and Davies in KZ2, result that followed Federer’s win in his Prefinal. The Italian outfit’s colors scored also a surprising victory with Hiltbrand in OK (after he won the Prefinal), a win with Hauger in the Prefinal of OK Junior and his great, but sour, sixth place in the Final.

HILTBRAND “HERO” OF THE DAY IN OK

OK. Pedro Hiltbrand has been the hero of the day in OK. The Spanish driver of CRG turned out to be unbeatable on the rain, as if he were a Scandinavian or north European driver. Following the dominant run of the Finn of CRG Paavo Tonteri in the heats, Hiltbrand, also on CRG-Parilla, took the lead winning a wet Prefinal, while Tonteri has been hit in the back of his kart ending the race in that way. Hiltbrand has also been among the main contenders of the victory in the Final, where he was hunting for the podium after an early lead. The CRG driver found the victory in the last lap instead, as he managed to inherit the position of his team mate Tom Joyner on Zanardi. Joyner had in fact installed himself on top in the closing stages, but was hit in a fight for the victory involving also Sargeant, Basz and Lundgaard. Hiltbrand crossed therefore the line first, followed by Sargeant, Lundgaard and Joyner. Lundgaard was later on handed a 10s penalty and Joyner, who was stripped of a sure victory, was promoted into third. Felice Tiene closed his effort with a very good fifth place, while Paavo Tonteri was sixth after an incredible comeback run started from the last position. The Portuguese driver of CRG Andriy Pits has also shown good speed and ended 20th.

KZ2. Fabian Federer of team SRP with Modena engine, has been the stunning winner of his KZ2 Prefinal, before keeping his momentum in the Final run on slick tyres in very wet closing stages. The race was eventually red flagged at the 20th lap, but was considered valid as the 75% of the 24 scheduled laps had already been completed. Right before the red flagging, Federer had been overtaken by another excellent driver, the young Dutch Stan Pex, of CRG Holland on Vortex engine, who has been very strong also on the wet. The final order followed the classification at the previous lap, therefore Federer was crowned winner and Pex was second. CRG’s top 3 was completed by another Dutch driver, Dylan Davies, of CRG Keijzer with TM engine, who managed to get P3 in the final few laps. Three CRG chassis with three different engines made it to the top three: the triumph of a super CRG chassis!

Benjamin Tornqvist of CRG Holland was seventh, while the other drivers on CRG-Maxter also put in strong performances, starting from Fabrizio Rosati who was sixth in his Prefinal, to the Japanese Fuma Horio and the American Sting Ray Robb, as the latter could not qualify for the Final by only a tenth of a second. The Portuguese Yohan Azedo Sousa on Zanardi had to retire from the Prefinal instead.

OK JUNIOR RUN WITH SLICK TYRES ON THE RAIN

OK JUNIOR. OK Junior’s Final has been spoiled since the start, as all drivers made it to the grid on slick tyres despite the falling rain. Starting the race in that way has really been quite risky. Rain stopped ten minutes into the race and the situation stabilized after the chaos of the initial laps. Nevertheless, the risk of incidents has been dangerously high, with countless excursions and track cuts. The Norwegian driver of CRG, Dennis Hauger on CRG-Parilla, was the one to lose out in this situation. The dominator of the weekend, after winning his Prefinal, slipped down several times in the Final, falling all the way to P12, but when the situation on track got more stable he recovered up to P4. He eventually had a contact when fighting for the podium and ended sixth. That was a pity, as such a start in the rain ruined a race that could have ended differently for him.

Among the CRG drivers partaking in the Final, the British Teddy Wilson ended his effort in P17, while the Brazilian Gianluca Petecof and the German O’neill Muth had to retire during the first lap. The Canadian Antonio Serravalle, the French Pierre-Louis Chovet, the other German Esteban Muth, Andrea Rosso of team Morsicani and the Swiss Tara Eichenberger of team X-Rei did not manage to qualify for the Final.

Dino Chiesa, Team Principal CRG: “If we look at the Prefinals and Finals run today and heats run yesterday, we can see quite a strong supremacy in all the three categories, which is a really positive result. The hard work started at the beginning of the year is giving its fruits. There is still a lot of work to be done, and we will definitely not stop here after such a good performance. We are a bit disappointed on the result of the Junior Final, as it started on tricky conditions. If the race director had waited five minutes to give the start, safety would have been higher, as drivers were still on slick tyres despite the falling rain. The initial laps have been a bit weird, with a lot of racing contacts. The point is that our top driver, Dennis Hauger, that had won everything up to that point, slipped down to 12th, before getting back on a dried up circuit until the contact in the last lap. This was the only race that we did not manage to win today, but we believe we are the moral winners of this Final too. We have been very competitive in KZ2, both in wet and dry conditions. The Final ended really well with an all-CRG podium. The OK Final saw Joyner on top being hit in the last lap. Pedro Hiltbrand managed to take the victory, which partially made it up for the injustice suffered by Joyner. Pedro has run a great Prefinal and Final, we reopened the Championship, as we did with Felice Tiene and Paavo Tonteri, who was sent off in the Prefinal before completing a very good comeback Final. Beyond our success, for the sake of our sport I really hope that the Federation can find a solution to the front fairing penalization: too many races have been wasted due to a flaw in the regulations.”

Pedro Hiltbrand, OK: “We got a great job done today. I won the Prefinal and took an early lead in the Final, then I conceded some positions to save on tyres a bit, before giving it all in the closing stages. In the final corner, I saw that all the others kept the inside line and I decided to go on the outside to be faster on the exit and sprint to the line. My rivals had a contact and I found myself in the lead all of a sudden. Things played out really well, I would like to thank the team for all the great work done.”

Fabian Federer, KZ2: “The race went really well. I have always been very quick, thanks to my Team SRP, to the Modena Engines unit, and to the whole CRG that supported me a lot. After the first laps run carefully, I started pushing. Keeping the lead in the rain has been quite tricky as braking points changed all the time. I am really happy, the weekend went well and now I am leading the championship. We will play all our cards in Genk’s closer.”